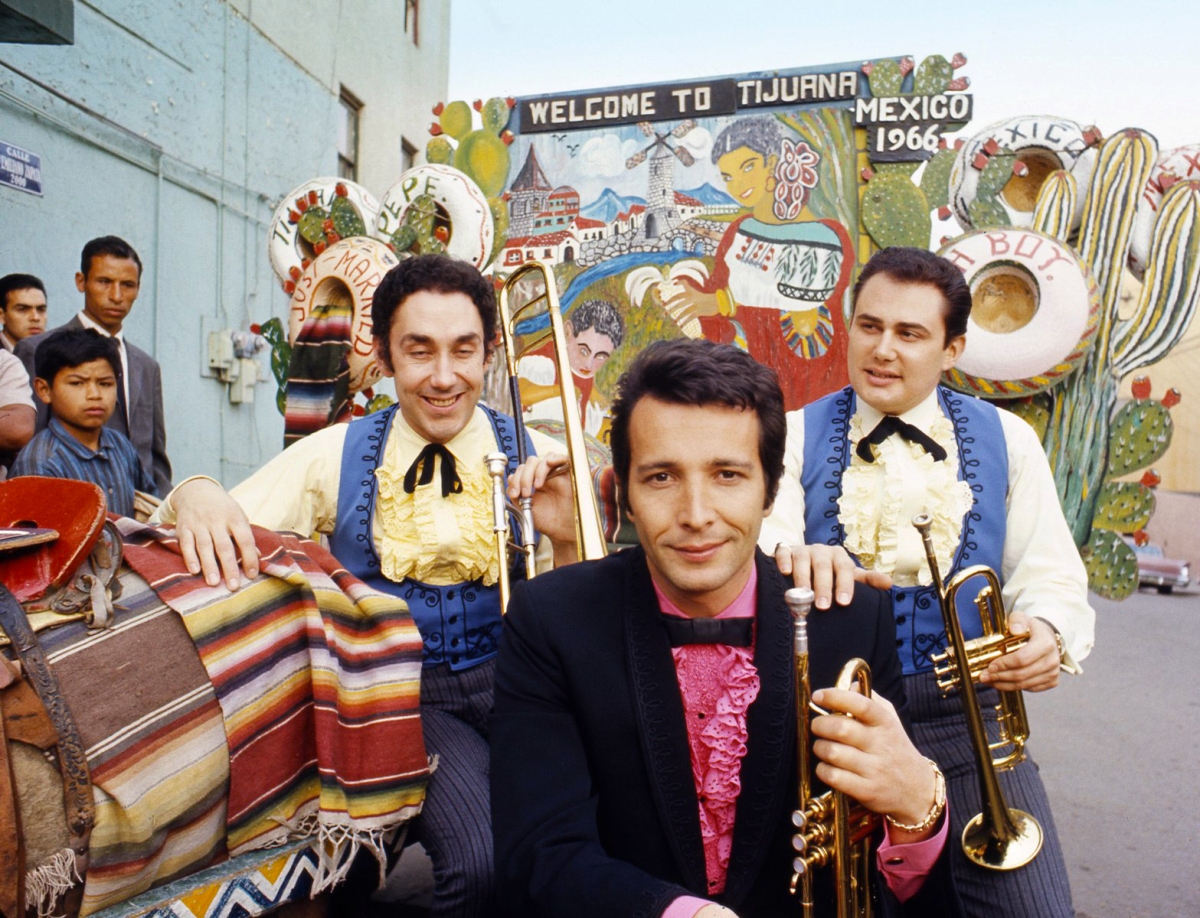 My parents bought Herb Alpert’s Going Places! when it was released, so it was always around the house during my childhood. I remember my fascination with the cover. The colorful, biplane with a “TJB Express” sign, the innocent sexuality of a maid reclining on the wing and Alpert grinning broadly, with his white scarf flowing behind him create a ridiculous picture. Today, it might be easy to simply dismiss this photo as sexist. But if you consider the absurdity of the premise and Alpert’s wide grin that lets you in on the joke, you can help but laugh, in spite of your more sophisticated, enlightened attitudes.

For years, Herb Alpert was a bit of a guilty pleasure of mine because I always considered “Tijuana Taxi” and “Spanish Flea” to be novelty songs. In recent years, though, I’ve listened more closely and now appreciate the musicianship of the band, the arrangements of the songs and the way Alpert makes the songs he covers his own. Unfortunately, even though I’m trying to judge Alpert’s music only on its artistic merits, my love of the culture of the 1960s keeps getting me sidetracked. I have to ask myself — why was there never a movie produced staring Herb Alpert and the Tijuana Brass? I remember watching Elvis’ movies on TV on Saturday afternoons, and wonder why the same formula was never applied to Herb Alpert and the Tijuana Brass? He had some chart success. He had leading man looks. One could even argue his music was the soundtrack for the period with it’s presence on television programs and commercials.

It would have gone something like this. Herb Alpert and the Tijuana Brass in Going Places!

Herb Alpert and the band play themselves. An actor plays their manager, a greedy, nervous fellow who, while out to protect the goose that laid the golden egg, still cares about “his boys”. This character is easily flustered as the band faces the trials ahead and provides excellent comic relief. Herb Alpert plays himself as a confident, tough and capable leader of the band who, though he takes his music seriously, still has a sense of humor and plays by his own rules, much to the chagrin of his manager.

The movie opens at a party where it’s being announced that Alpert and the band will be playing a benefit concert for a children’s charity. A young bratty millionaire is in attendance who becomes jealous of the attention the band is receiving. After he has a confrontation with Alpert at the party, the young millionaire bets Alpert that he and his band can’t cross Mexico north to south and back again in time to play the charity event the next week. A condition of the bet is that they must be self-sufficient without assistance from anyone back in the states. If they win, the millionaire donates $50,000 to the charity. If they lose, the band must perform a Lawrence Welk style show, potentially ruining their careers. Alpert, seeing this as a matter of pride and an opportunity to present the charity with a boon, accepts the challenge.

Unbeknownst to them, the young millionaire is following them, attempting sabotage at every opportunity. He’s successful as soon as they enter Mexico, making the band’s tricked-out tour bus crash and injure their driver Speed, who used to be on the demolition derby circuit. All seems lost until they spot a noisy, run-down tour bus driven by Bill Dana in character as Jose Jimenez. The band pools the last of their cash to hire his services. Unfortunately, they still need cash for food, gas and lodging for a week long trip. According to the terms of the bet, they can’t wire home for cash, so they have no alternative but to play every cantina and night club in which their manager can book them.

This is where the movie really takes off with many opportunities for comedy and music; a rehearsal session on the bus, an impromptu song for a group of kids playing around a fountain in a town square and, of course, a sunset walk on the beach with a “señorita” while Alpert sings “This Guy’s in Love with You”. He promises to return to her town one day, and we’re left wondering and hoping.

Following the formula Hal Wallis established for Elvis, the climax is a fight where Alpert must prove himself worthy of leading man status. The band is one day away from the concert and well within driving range. Unfortunately, their bus’ water pump, fuel pump and suspension were all blown during a speedy escape from a gang of motorcycle banditos who misunderstood a band member’s intentions towards their leader’s sister.

To pay for the repairs, they must play one final gig in Tijuana. After the performance, though, the cantina owner, a big, ugly piece of work, refuses to pay. Alpert stands up to him, saying “Either The Brass and I get our money, or you and I are going to have a problem.” The owner throws a punch which Alpert easily dodges, “El Garbanzo” starts playing and the whole bar starts fighting. Alpert takes on the tough leading man role as the band fights the owner’s goons with various comedic shenanigans. The bartender ducks behind the bar and takes advantage of the situation by reaching up from his hiding place, grabbing bottles of liquor so he can get some free drinks. Completely by accident, he grabs bottles just as they are about to be hit by flying chairs or glasses. After beating the owner to submission, Alpert collects the band’s pay and they’re able to pay for the repairs to the bus.

“Either The Brass and I get our money, or you and I are going to have a problem.”

There’s one final hitch at the border crossing when a nearsighted border patrol officer (a brilliant cameo by Don Knotts) doubts the band’s US citizenship. While the manager argues with the officer, the band takes out their instruments and begins playing “Spanish Flea”. The officer is beside himself with joy, exclaiming that he’s their biggest fan. He lets them pass, nodding his head and saying “What a swell bunch of fellas” as the bus drives across the border.

The band takes to the stage just under the deadline and performs “A Taste of Honey” to an enthusiastic crowd. The millionaire is pulling his hair out during the performance, but is kept from escaping by the manager. After the concert, the millionaire’s father arrives and it is revealed that the kid has no money of his own. The father, a fan of the band, honors the bet and his son is forced to pay off the debt by working as the band’s roadie. Bill Dana (Jose Jimenez) is now the band’s permanent driver since their old driver decides it would be safer to return to the demolition derby circuit. Tijuana Taxi plays over the closing credits as we see the rich kid trying to load the band’s equipment on the bus, tripping and dropping cases.

I could easily convince myself that I had seen this movie on TV on a Saturday afternoon in the 1970s when it was too rainy to play outside. I can see the old bus careening down a dirt road to “Mexican Road Race” or the band playing “Bittersweet Samba” at an upscale night club in Mexico City. If you close your eyes and listen closely, you can see the imagery inherent in these songs. I know there are trumpeters with greater technical ability, but when I listen to Alpert, his playing sounds deliberate, like he’s making conscious choices to create visual imagery and emotion.

Maybe it’s best this movie was never filmed. In a way, it never needed to be. No doubt the original print would be faded and in need of restoration. The advantage to Alpert’s music, though, is that today, its vibrant Technicolor images are as pristine as they were when he recorded them over 40 years ago. Anything else might be a distraction.

To read more from David check out his design blog, Design Squabble. 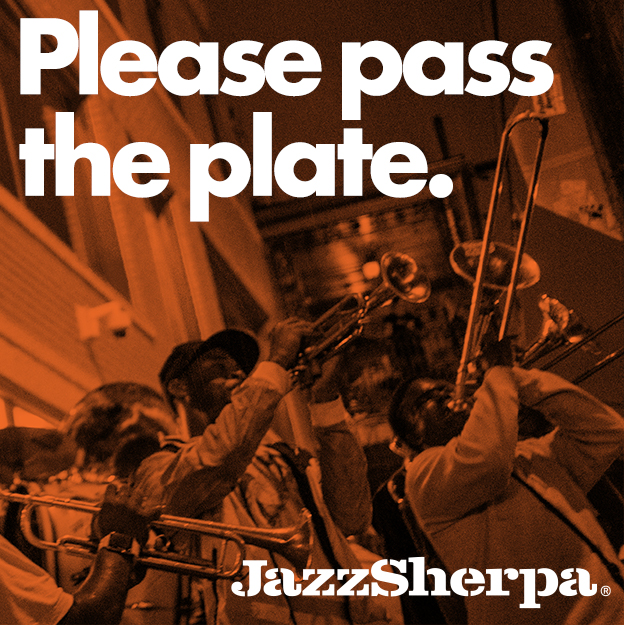